If you live in the National Capitol Region then you need to know this. 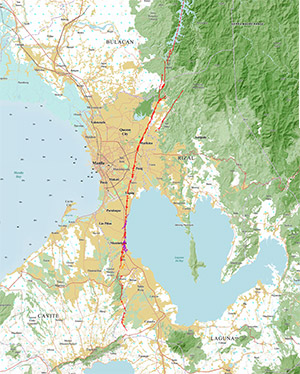 The most significant, historic earthquake zone (geological fault) in the Philippines is located just 10km East of Manila City and is known as the "Marikina Valley Fault System" or, frequently, "Marikina Fault". Archaeological evidence tells us that the Marikina Fault earthquake zone, that runs almost North-South along the Marikina Valley, from Bulacan to Cavite and Laguna, and almost exactly parallels the route of the C-5 circumferential road around Metro Manila, slips every 200-400 years (average every 310 years) delivering a magnitude 6.0-7.0 earthquake (maximum estimated 7.5). The last time the Marikina Fault earthquake zone slipped is calculated to have been in 1771AD, meaning that this geological fault is not due for another movement for about 50 more years, based on the average. So a better-safe-than-sorry philosophy suggests even more reasons to chill out on the beaches, especially around Puerto Galera.

There are actually a number of recognized earthquake fault lines within the Marikina Valley Fault System. The most significant of which are the 10KM-long East Valley Fault, in Rizal, and the 100KM-long West Valley Fault, from Bulacan, down through Cavite, to Laguna. Either or both of these faults may slip with a jolt, to dramatic effect, at any time.

What causes a fault line to slip with a jolt? The tectonic plates (lithospheric plates) that form the outer layer of our planet are variably under pressure from the Earth's molten core and the gravitational forces exerted by the moon and the larger planets. The entirety of the Philippine Islands was created by the collision of the Sunda Plate (a minor extension of the Eurasian Plate) and Philippine Plate (central and southern Luzon lie on the Sunda Plate while the Philippine plate extends along the Eastern seaboard), the latter being influenced by the much larger Pacific Plate, farther to the East. Tectonic plates typically slip over or under or along each other at a rate of 2-5cm per year.

Areas close to the edges of the plates become deformed by the movement of these huge sections of the Earth's crust; fault lines are created as these adjacent parts of a plate become deformed and crack. Similar to the tectonic plates, these fault lines (cracks) slip some small amount each year but, sometimes, the underlying rock is so tough that it temporarily prevents movement and so pressure builds up. Eventually the pressure is so great that movement can no longer be prevented and the fault line will slip with a jolt: an Earthquake. Such an earthquake may last anywhere from a few seconds to a minute or more, depending on how much pressure has been built up and how far the crack needs to move before the pressure is released.

What Is The Risk?

Earthquake severity (as experienced by people on the surface of the Earth) depend largely on how deep the earthquake is: an earthquake 100KM deep will not be felt as severely on the Earth's surface compared to a shallower earthquake at 10KM deep. The Marikina Valley Fault system is considered to be a shallow fault and so the severity of even a modest 6.0-Richter earthquake will feel very strong to people within the National Capitol Region. Based on historic evidence, it is estimated that the Marikina Valley Fault System produces earthquakes in the range of magnitude 6.0-7.5 Richter.

In a 2011 a report by the Earthquakes and Megacities Initiative ("EMI") estimated that a magnitude 7.2 Richter earthquake occurring within the Marikina Valley Fault System would severely damage 175,000 buildings, cause 33,500 deaths, with 114,000 injured and 3,000,000 needing evacuation due to unsafe buildings. Metro Manila has grown significantly in size since 2011 and a significant portion of that development has been close to the West Valley Fault, so these estimates could possibly be doubled.

Remember: earthquakes do not kill - buildings kill; explore the Philippines' beautiful beaches, rivers, mountains and rain forests, instead of its cities.

Can't find what you are looking for here? Email: webmaster (at) pgyc.org

All Images and Text on this page are covered by Copyright and are not considered Public Domain; contact the webmaster(at)pgyc(dot)org to request permission to resuse an Image and or Text on this page